On the Internet, you find a lot of people willing to spew hatred. It’s just a fact. Whether it’s an honest opinion or general trolling, you typically run into a bunch of people who are simply willing to go out of their way to put you down because

You disagreed with them.

The problem with this is that, as a whole, the people who are willing to spew these kind of violent outbursts of righteous anger with their noses so high in the air they can’t even see the keyboard are almost always speaking purely from an opinionated point of view… or at least one that is purely decorated with other people’s voices who share the exact same opinion.

(If you get all of your news from a single channel and don’t change your mind about a topic when facts and evidence are presented in the contrary, you are not as well-rounded as you think.)

It’s like a crazy farm. For crazy people. Only, every single one of them thinks that they’re right. I was on Facebook when I came across this gem in my newsfeed: 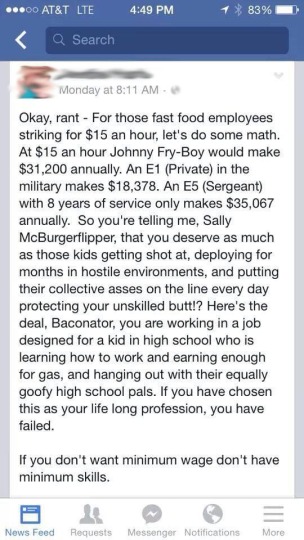 This lady, we’ll call her “J”… well, she starts off pretty strong. From the get-go, we know it’s a rant. That in and of itself is not bad. People rant on social media all the time, and it’s become a fairly accepted pastime for most people. Bad day at work? School? You’re sick? Post it to social media! I mean, hell, this blog is basically a giant tribute to my opinion, so clearly, the rant is something that I’m not only familiar with, but chill with pretty frequently.

By the first sentence, I already knew that I was in for a bad time. It’s one of those things that you can just tell by the vibe before you even read it. Someone’s about to blast you with an opinion, and you just. can’t. look. away. It’s like the friggin’ Ark in Raiders. You know it’s gonna be filled with bad shit, and you can either face it or close your eyes and pretend it’s not there.

J starts off immediately by demeaning fast food workers. Immediately. It was almost as if she had been personally offended by a McDonald’s employee who DARED to ask for more money. Was this a personal vendetta? Did she go to said restaurant only to be turned away by a picket line? Who knows? What we do know is that J is really, really, pissed at Johnny Fry-Boy, Baconator (That one’s not so creative, J), and Sally McBurgerFlipper. She is righteously indignant that a fast food worker would request a pay increase to a decent living wage.

I mean, I have no idea how someone could get so angry over someone asking for more when they don’t have enough…. Oh wait. 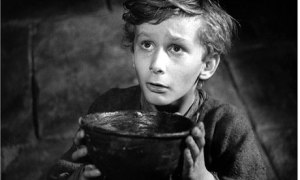 Not pictured: J standing off screen yelling at him.

Apparently, if a fast food worker was paid the same amount as someone in the military, it somehow lessens the amount of pay for said soldier. J’s got a bone to pick with those poor employees, and she’s not afraid to show it. Given her utter horror at the idea, and her in-depth knowledge of pay scales in the military, I’d venture a guess that J is married to a soldier and isn’t happy about the money. I can understand that. I actually have a few friends in the military, and I know that things can get tight trying to support their families. I know that there is the issue of them not being paid, being given less than they’re worth, and generally being screwed over if the government is wearing their “Dunce” caps that day (Hint: they are ALWAYS wearing them).

I get it, J. I totally understand that you are angry over the poor pay of men who are willing to sacrifice their lives for us and be apart from their families for long periods of time. I get that it’s unfair, but that’s why all minimum wage should change. Attacking a fast food worker who wants more isn’t the answer.

Dealing all of your fury against people who not only make up a large portion of our economy but also fill necessary jobs so you can feed your kids when you don’t feel like making dinner before a ball game is not going to help. Your rage is misplaced. You should be angry at the government: not at Johnny, Baconator, and Sally. They’re doing their jobs, just like anyone else. They might be putting themselves through school. Did you think of that? They might be trying to pay some increasingly high student debts so they can get a better job. They might be teens trying to work part-time, or even older people who can’t retire because they can’t live on social security. Designed for kids in high school? Honey, this is 2014. I see 60 year olds at Walmart and Subway and Burger King all the time. We have an increasingly pinched middle class and we’re recovering from a recession and the highest unemployment rates since the Great Depression.

I think you need to redefine “jobs for high schoolers” because I can even name some people with fantastic degrees working in retail, in grocery stores, customer service, and yes, even fast food. Do they want to do those jobs? No, I’m sure they don’t. But they need to work to eat, and they deserve to be able to live on the wages that they’ve worked so hard for.

Yeah J. You have clearly done your research on this topic.